Six of Galway’s best young entrepreneurs have been announced as county winners in the Ireland’s Best Young Entrepreneur (IBYE ) competition, which took place in the Portershed, Galway City Innovation District.

The IBYE competition, now in its third year, has a €2 million investment fund and is run in each of 31 Local Enterprise Offices (LEOs ). It is supported by the Department of Jobs, Enterprise and Innovation and Enterprise Ireland.

Galway’s “Best Young Entrepreneur” was named as Paul Killoran, age 33, from Ex Ordo. The young entrepreneur also won the category for Best Established Business and an investment fund from LEO Galway worth €15,000.

The county winners will now proceed to eight regional finals in January 2017 from which 24 contenders (three from each region – one in each category ) will be selected to compete for the national title of Ireland’s Best Young Entrepreneur. A further €100,000 investment fund will be available to invest in the winners of the three categories at the national final, one of which will also be named as “Ireland’s Best Young Entrepreneur.

Meanwhile, the category runners-up also shared an investment of €13,000 with Richard McCurry of Newby Chinese, aged 32, in the Best New Idea category and Niamh Daniels, aged 28, in the Best Startup category and Margaret Fitzpatrick, aged 31, in the Best Established category.

Breda Fox, Head of Enterprise with the Local Enterprise Office Galway said: “We started the search to find Ireland’s best young entrepreneur in August and the competition received a record-breaking 128 entries this year in Galway of 1,800 young entrepreneurs applying nationally. This huge number of entries is a result of building connections with NUI Galway EntreSoc and GMIT along with targeted advertising for young entrepreneurs. After a very successful IBYE bootcamp and County Final, the future is bright for both youth entrepreneurship and job creation in the region.”

Back to News Page

Dr Bernard Collins appointed to the Board of Directors 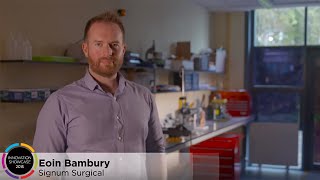